I had my first crack at Wargame - European Escalation on Steam last night, and boy what fun that was! WEE is an RTS set during the Cold War. You command combat formations from either side, drawn from historic orders of battle from the 1970s and 1980s. I've always wanted to wargame NATO vs Warsaw Pact, probably ever since I stayed on an army base in West Germany in 1980, and this is a rather nifty way to do it. No painting tanks. No model terrain. No need for an opponent, although I expect an online one is readily available. It was all quite a revelation for me.

I decided to buy this game when Steam was having a 75% off sale in July. I was attracted by the awesome scenery, which really does look as if you're hovering above the battlefield in a helicopter. It is not far from being almost photographic in its realism. Plus, you can zoom in to watch how individual engagements are working out or even follow a scout as he investigates a deserted town.

This is very much an armoured game - you do get infantry, but they're little more than speed bumps it seems once they exit their armoured personnel carriers.

In my first outing I chose to command a West German brigade. It was 1975 (the year I started school, in fact). The East Germans had launched a raid over the border after Bonn refused to hand back a defecting border guard wanted for murder. I was commanding a troop of Leopard tanks sent in response with a small number of scouts, and some conscript infantry who seemed to largely want to sit and watch. I only worked out the reinforcements tool towards the end of the game, so for most of it I completed missions using the same four tanks, one of which got badly shot up, but carried on throughout the scenario. Hero! 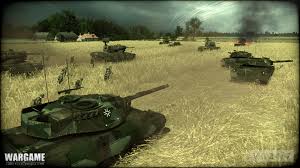 Leopard tanks on the prowl in close up format!

The initial mission was to secure the first of two bridgeheads the communists had established on the wrong side of the border. I was initially confronted by T34s (!), which the Leopards quickly made short work of. The DDR boys followed this up with some T55s, but again superior range and accuracy told a bloody tale.

The next job was to move north to a town where a second enemy bridgehead was established. I quickly came to appreciate the value of armoured scouts. These boys have a superior detection range, and indeed my tanks proved eminently capable of rolling straight past enemy infantry and getting shot at from the rear, which they find very disconcerting, with suitable impact on morale. However, the scouts are useless in a straight up firefight with tanks or even infantry with anti-tank weapons. Hence, I began using them as point men, and dropping them back behind the Leopards when they ran into trouble. You can tell I was in the Combined Cadet Force, can't you?

A more distant perspective of a tank battle.

I also had to sortie over the border, about a mile into East Germany, to take out the enemy HQ and fuel dump. This was where I realised my tanks were running out of fuel. Luckily, they were able to stop and refuel before blowing the place.

The final challenge was securing the northern bridgehead. Lacking scout cars, my tanks had serious problems hunting enemy infantry through the streets of a town. Only once I brought in scouts could they ID the enemy and take them out. Even here, I lost a Leopard which strayed down a side street and got ambushed. Luckily, by this stage, I was bringing up another troop of tanks, so was quickly able to complete the mission.

An example of a tactical map with ranging tool.

I also love the graphics on this baby. Enormous fun tracking behind scout cars as they probe ahead, or watching your Leopards mow down a farmer's fences or plough through some poor sod's house. What's cooler than commanding a tank? Commanding EIGHT! Vicarious, unpolitically-correct fun. Bring it on!