Following our game of Rippers last Friday, we moved on to play some Touch of Evil. This is an excellent boardgame from Flying Frog Productions that has obviously been inspired by Sleepy Hollow. Players take on the roles of investigators in the New England town of Shadowbrook, seeking to hunt down the menace that threatens the settlement.

There a just so many things I love about this game, it is hard to really know where to begin. It CAN be played as a co-op, but in its original form, players are competing against each other to be the first to slay the monster. As in Arkham Horror, players face off against one of a number of foes, each of which brings with it a series of additional menaces with which to plague the town. In our case, we were hunting the Werewolf.

A typical villain card for Touch of EvilFour of us played: I was an Inspector, Manoj played the School Teacher, Sebastian was a Drifter, and Kelvin got the Highway...er...girl. The currency of the game is investigation points, which you can earn in a series of ways, but one is investigating four brooding locales on the edge of town, namely the Manor, the Ruined Keep, the Old Woods, and the Windmill. Each has its own encounter deck with possible benefits - like the hunting rifle Sebastian found in the Windmill - and problems - like the cave in my Inspector suffered in the Keep (he got robbed by bandits on his second trip there!)

The town also has six Elders, leading citizens who may/may not be in league with the Big Bad. Players need to find out who is working for the cause of Evil, and who just has dirty little secrets to protect. You can spend investigation points to do this, and you need to know this because not only do you require trustworthy Elders to help you hunt down the Werewolf, but also need to be able to set Evil Elders on other characters if they are closer to finding the enemy. 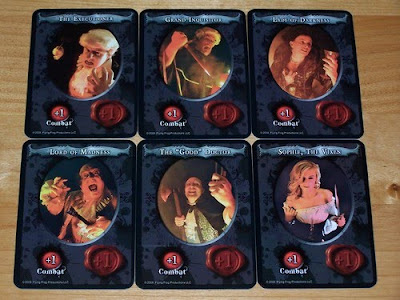 Town Elders with their Evil sides up.
We were only playing the basic version of the game, but managed to complete it inside three hours on our first sitting, which makes it ideal for an evening's play. At some point the Big Bad gets revealed when someone buys and plays a Lair card - a town location where the Werewolf was hiding out. In this case I tracked it down to the Covered Bridge. At this stage the player selects up to two Elders to accompany him on the hunt, and initiates a show down with the beast. Other players may then designate other Elders as Evil Elders (if they're wrong, they forfeit all their investigation points). These immediately join the Big Bad as allies.

My mistake was to trust one of the two Elders I brought with me: I could have sworn I had checked her out in advance but no, she was in league with the Werewolf, and attacked me. The Werewolf ended up with two Evil Elders fighting with it: I killed both, and took the Werewolf for 80% of its wounds pool, only to be finally knocked out when Manoj played a nasty Event card on me! 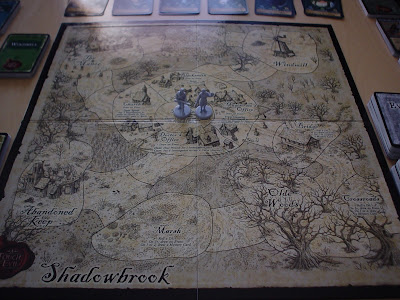 The village of Shadowbrook
This allowed Sebastian to attack and kill the weakened Werewolf in his turn, before it had a chance to heal. Here we made one of our few mistakes: the Werewolf should have been allowed to relocate to a new lair, forcing any other player who wanted to hunt it to spend points to activate their own Lair card. This is not mentioned in the rules, but the designer says this is the case on the Boardgamegeek boards. It would have allowed Manoj to then successfully track down and kill the Werewolf in his turn as Seb was out of investigation, and Manoj would then have won. I gambled that I'd be able to take the creature down, but did not allow for an Event card to be played on me.

Secondly, DEAD Elders - and the Werewolf had killed two of these before the showdown - CAN come back as Evil Elders by faking their deaths. Whether you can investigate Elders once dead, I'm not sure. But apparently players can nominate dead Elders as Evil just as they can living ones. I'm in two minds about this, but can see the sense in it, as it increases the supply of traitors. Tactically, you may want to leave an Elder's secret hidden for a second showdown, if you think the first player to initiate one may not succeed. It also makes it that little bit harder for the first player to declare a showdown. 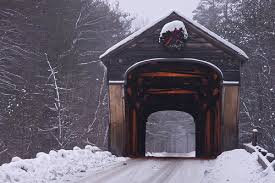 Why covered bridges? Living as we do in the UK, we were somewhat at a loss as to why there are covered bridges in the US. We decided to do some investigation of our own, speculating that it is perhaps to prevent the weight of snow from bringing the bridge down - the peaked roof acting to displace the weight more effectively. Apparently, the roof is there to protect the bridge from ongoing weather damage, including snow and frost, which makes the bridge last longer and have less need for repairs. It leaves me to wonder why Britain's uncovered medieval bridges are still in use in so many places - maybe medieval bridge builders had all that serf labour, so less worry about costs...?