The Real Housewives Of DIY: A Couch Story

Several months ago a friend approached me and asked if I would be willing to help reupholster their couch. Whoa! That seemed like a GARGANTUAN undertaking! I had never reupholstered anything before. I remember thinking "how hard can it be?", agreeing to do it, and going home to watch Youtube videos to learn how. (God bless Youtube.)  I found these ones to be the most helpful. (1 and 2)

Here are some before pictures and I'll let Kayleen show you the afters. 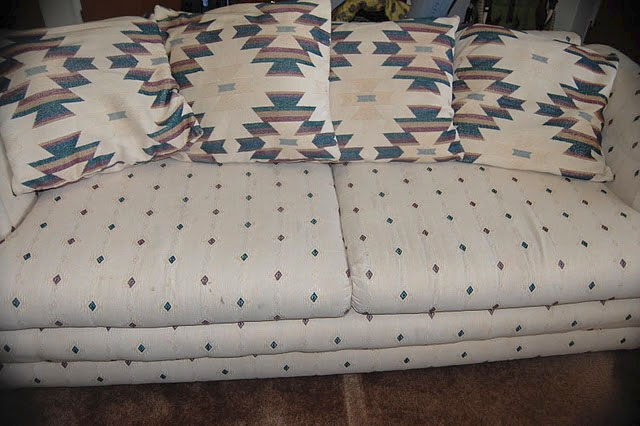 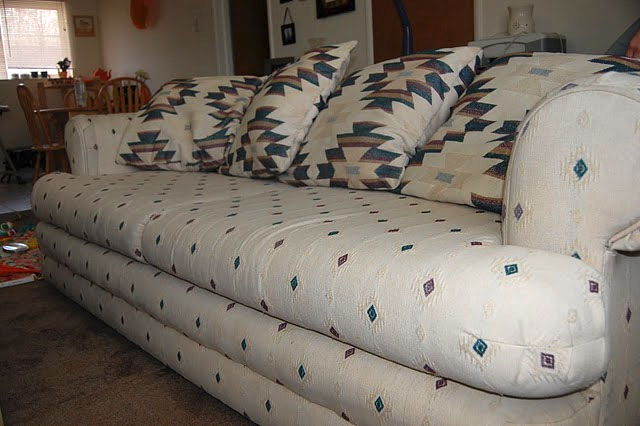 Eww yucky right?!------------------------------------------------------------------------------When my husband and I got married we were very poor and had no money for furniture. Luckily, we found an old couch, probably built in the early 70’s, sitting on the side of the road. And what did my resourceful husband and I do? We picked it up and dragged it into our ghetto hole of an apartment. Three years later my husband and I upgraded! We now live in an apartment without broken windows, holes in the floor, and mold eating away at the living room wall. I, being the silly wife of an always logical man, asked if we could look for a new couch, and, of course, the answer was “Wouldn’t that cost money?” My dreams of enjoying novels on a sofa that didn’t resemble a circus with murderous clowns were crushed. I was doomed to endure the ugly agony of forest green, blood red, and dirty water brown sitting like a white trash lump in my living room. One Sunday at church, while singing the closing hymn, I received a heavenly inspiration; I turned to the beautiful and oh-so-talented Julia Miller sitting to my left and was prompted to say, “Would you want to reupholster my couch?” To which she responded with an enthusiastic “Yes!” And that is how this lovely couch of yellow, robin egg blue, and teal was born – not to mention the wonderful friendship with Julia that I am so grateful to have. We went to a discount fabric store, bought a ton of fabric, then came home and started ripping the old nasty fabric off my hideous couch that needed to die. It is amazing what you might find inside an old couch, I will not go into detail, because it was nasty. All I am going to say is that Julia had to run home and grab a container of disinfectant wipes and her heavy duty vacuum so I could de-germ my living room. (I still shudder when I think of that day.) Unfortunately, the padding in the couch was too destroyed to reuse as well. So, Julia and I stripped the couch down to its bones. We were left with wood, cardboard, and a few springs to work with – and work we did! We returned to the fabric store, bought padding, came home, and started stapling. There were a few times we had to rip whole rows of staples out, but those were usually my fault. And there were times we had to glue fabric back together after cutting it wrong, that was both our faults. There was a lot of sweating, a lot of laughing, and a lot of cheerios to keep our two babies happy.
Here she is! 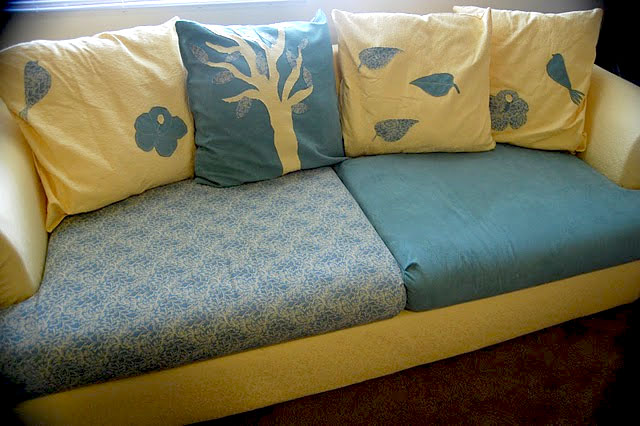 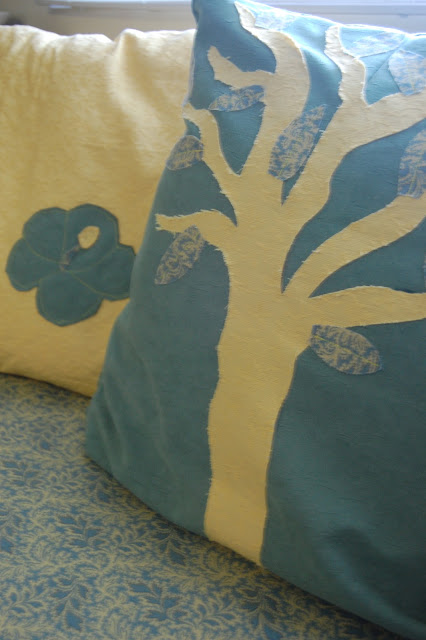 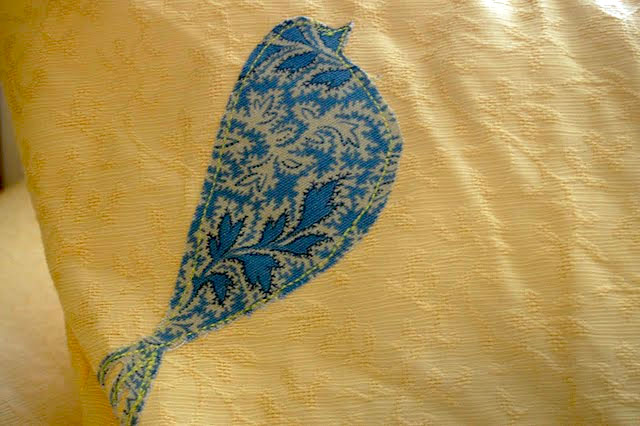 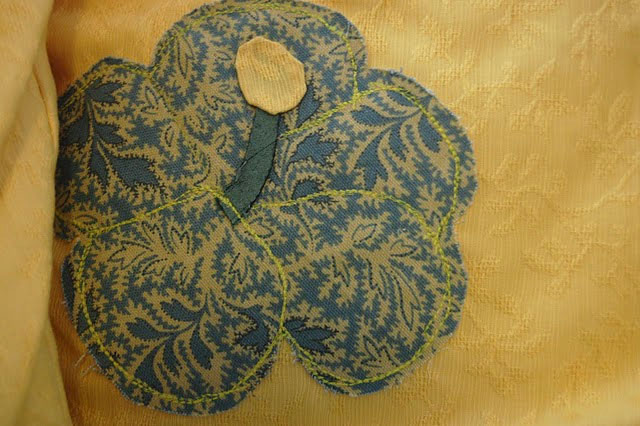 The frame of the couch was the most difficult. The basic method was holding fabric up against the couch, and stapling it down once we thought it looked right. (Believe me; this is much harder than it sounds.)The cushions weren’t too bad. My friend Megan and I ripped the seams in the old cushion covers, and used those pieces as a pattern for my new fabric. Megan then took the materials home and sewed the cushion covers for me – and I am so grateful she did. I can’t sew without pseudo-swearing and my husband thinks that is just as bad as really swearing, so our marriage probably would have suffered if it hadn’t been for her. The pillows were easiest. I cut up the old pillow covers, used them as a pattern on my new fabric, and livened them up with some interesting, but not too complicated, appliqué. The appliqués were twofold, I really like them, but I also needed something to tie the mismatched cushions in with the rest of the very yellow couch. Most people think the mismatched cushions are rather odd, but I love them! I have a fetish for mismatched things. I don’t wear matching socks, I don’t wear matching earrings, and I have to change my outfit if it looks too coordinated. So having a patterned blue/yellow cushion paired with a solid teal cushion makes the couch perfect for me. The style and colors compliment my personality one-hundred percent! It’s like my soul mate in couch form! It is so nice to have personalized furniture that is exactly what you want and is undoubtedly you. I could have never bought this couch at a store. And I love it when people come into my home and say “Wow!” It doesn’t even matter if they mean that in a positive or negative way, because I didn’t make it for them, I made it for me, and I love it exactly the way it is. Thank you to my dear friend Julia for taking on this bold adventure with me and making it a success – I definitely could not have done it without her. And thank you to my dear friend Megan for her generosity and time – cushions are not an easy task and she is a wonder woman when it comes to needle and thread. Every time I see my couch I think of how blessed I am to have such wonderful friendships. I will miss both these amazing women tremendously when I move to Indiana next month and I am so glad I will have my couch with me. It is like bringing a piece of our friendship along, and it will make my new apartment feel like my new home because I made it with people I love. Some couches are just couches, but not this couch. My couch is a place I can read, cry, snuggle my family, take naps, and feel completely at home while doing it. It isn’t just comfortable, it’s comforting. And it isn’t just an odd couch, it’s MY odd couch.