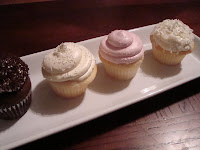 It's not that we're late coming into America's Great Cupcake Craze. In fact, we enjoyed some delicious cupcakes at Butta' Cakes during a fall weekend getaway to Greenport, Long Island. In Pasadena at Dots Cupcakes, mini cupcakes, in flavors like strawberry lemonade and cookies-and-cream, were a tasty late-night indulgence. And one time, in Boston, Amy joyfully skipped into a shop called Johnny Cupcakes with the hopes of biting into a buttercream-topped confection, only to find that it's a clothing shop. For, like, skater-type youngsters. (We won't discuss how old that made her feel.) While one magazine recently claimed that cupcakes are "out," we'll always love the idea of having our very own, frosting-topped, sugar-n-carb snack cake. They're even portable! 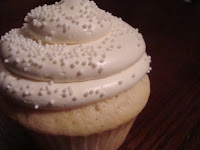 All of this is to say that we finally made it to our local cupcake factory, an easy-to-miss bakery in Glastonbury called Sugarbelle. We tried several of the flavors that were beautifully displayed in the case on a recent rainy afternoon: Tahitian vanilla bean (shown, right), red velvet (shown, below), coconut cream, berry almond, each with its own expertly made and matched frosting (which is the most important part, of course!). There are only two words to say about these cupcakes: simply irresistible. Why did it take us so long to visit? How soon can we go back? Exactly how many pounds are we going to gain? 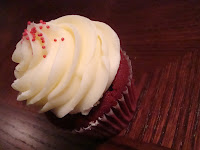 Sugarbelle not only offers six to eight varieties of cupcakes each day, but also makes cakes of all kinds (including wedding), petit fours, and cookies, and takes special orders. Get over there and treat yourself - we'll see you there!