The Battle Of The River Granicus 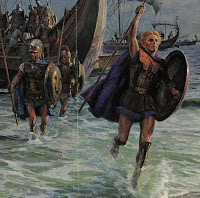 Alexander lands in Asia337 BC: The Macedonian army is encamped at Sestus in Thrace. During the winter Philip is assassinated at his wedding. Speculation is rife as to who is responsible - some point the finger at his wife, Olympias, other blame the Persians, trying to pre-empt Philip's planned expedition to Asia. Still others whisper that it is Alexander himself who is responsible.

Alexander is swift to take advantage of events, and is acclaimed king by the Macedonian nobility. Olympias arranges the murder of Philip's pregnant bride. Alexander does not stay long in Macedonia however, and he and Hephaestion are soon riding for Thrace as the weather warms up.

In Sardis more Persian light cavalry arrives with the spring. More Persian infantry is known to be massing in the south near Halicarnassus. There is talk of more soldiers on the King's roads, heading into Asia Minor as Darius mobilises to defend his domains. Alexander can't really afford to loiter in Thrace training his new recruits. It is time to move before the Persian army becomes too powerful.

Alexander crosses the Hellespont into Asia with a slightly bigger army than Philip used in the previous summer in Greece. But he lacks his father's experience. This is probably the most dangerous aspect of the campaign at the moment. Hephaestion will be useful but the 19-year-old king needs more advisors and the confidence of his men, which may not be there yet. It is important to win a battle on his own, but it is going to be risky.

Crossing the Hellspont into Asia is expensive (-5 Gold!), depleting half of what is left in the Macedonian treasury. It is time to find some more loot. Alexander is now in Illium, and visits the ruins of Troy where he consults the oracle there. "Pray to the winds - they will prove to be the mighty allies of Greece," it says. If Alexander spends 5 Gold within the next two turns (i.e. before the end of summer 335 BC) he can complete this prohecy.

With only 7 Gold in the treasury Alexander is nearly broke and facing a hefty army under the command of the renegade Greek general Memnon, which is parked on the River Granicus. It is time to test Alexander's mettle against a full Persian force under an experienced commander. Alexander prays to Zeus and commits his army to battle. Another 5 Gold is spent, 2 left in the coffers.

The Battle of the River Granicus (337 BC)

The two armies arrayed on opposite sides of the river, but the Macedonians had trouble deploying, with some confusion in the ranks. This was not a good start. Also it could be seen that the Persians had a LOT of Greek mercenaries, more than Alexander had been expecting. There were close to 15,000 Greeks under Memnon's command, perhaps twice what Alexander had been told. This included survivors from Chaeronea who were out for revenge.

Alexander spent 1 Gold to buy one extra Battle Plan but with the confusion was going into the fight with only 2 Battle Plans - it was going to be a close run thing.

Unlike the army at Chaeronea, Memnon had more light troops and 4000 cavalry. Alexander was banking on his Companion heavy cavalry to deliver another victory similar to Chaeronea.

"Here, Memnon had concentrated his forces; now Darius' commander-in-chief Western operations, he was, as the Macedonians admitted, a man of 'great courage and deep understanding of strategy.' Memnon had sent his Persian wife Barsine with their children to Darius for safe keeping. With him were the Athenian mercenary commanders Ephialtes and Thrasybulos, two men who had been on Alexander's wanted list since the Theban revolt." Michael Wood, In The Footsteps Of Alexander The Great (BBC Books, 1997).
The battle opened with a tussle between the archers on both sides, with the Macedonians getting the better of the contest, driving back the Persian shooters. The Persians then threw in their light cavalry, but their hit and run tactics were having little impact on the enemy line. Next the Iranian heavy cavalry charged with the Companions riding to meet them in an epic clash. The Iranians emerged the victors, driving back the Companions, who extricated themselves with limited losses, although the Iranian horses were looking a little blown by the length of their charge.

Memnon stayed on the offensive, sending in his Greek regiments. Both sides' infantry started taking losses as the lines engaged. The bloody business was afoot. So far the Persian army was relatively unscathed, but their cavalry was surprising ineffective. If they were going to win, it would be with their infantry formations.

Alexander needed to get his Companions back into the fray. This they did, hacking into the Persian and Greek infantry, and starting to make their presence felt. They focused on trying to break the enemy line although Alexander was painfully aware that the Persian cavalry was rallying again. The battle continued to rage between the Macedonian and Persian infantry with neither side giving much ground. Could Memnon break Alexander's centre before the Companions chewed his army up? He needed his Iranian cavalry wing back in the fray.

Alexander finally led his own personal cavalry troops into the battle, tackling the Persian heavy cavaly and inflicting some losses on them in a desperate attempt to stop them from coming back into the battle. He didn't succeed in driving them off but they were cut up badly.

Alexander's Companions rode to the king's aid, helping to route the rest of the Iranian heavy cavalry before it could be committed to the fight. In the centre the Hypaspists were beginning to finally make some ground in the infantry slugging match. Memnon's lads were digging in their heels but they were beginning to lose soldiers at an unaffordable rate. Morale was starting to plummet. Alexander was pursuing the Persian light horse now, in an effort to draw Memnon's fangs.

The Macedonian phalanx had been largely fighting a containment action for the duration of the battle.  Now they finally made their presence felt, and drove forwards, crushing Memnon's infantry. The Greek general fell in the fray and the Persian light horse fled the field rather than face Alexander. The battle was won. Losses had been lighter than expected and the decision to take out the enemy heavy cavalry as a priority seemed to have been the right one.

Alexander picks up 2 Glory for winning the battle but no Glory for Memnon as he did not face Memnon personally. Short of Gold (1) he has no choice but to plunder the surrounding area (+12G). It means that there will still be no regular income for his coffers, but he now has 13 Gold. 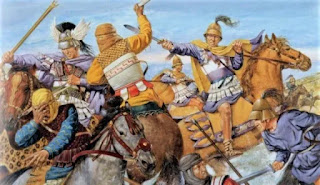 Alexander enters the fray at the River Granicus
336 BC Time is of the essence, and with 4 Glory under his belt Alexander considers moving south against the Persian garrison in Sardis before they can get further reinforcements. It proves expensive and he spends 5 Gold getting there, which is more than he can afford. He decides to try to intimidate the Persians into surrendering, but given his and his father's plundering activities to date (-2 Raze penalty), this could be tough.

The Persians are not playing ball and decide to sally out before Alexander reaches Sardis, hitting him with their cavalry force. The Persians have 4000 cavalry, a fast moving force composed of equal amounts of armoured and light horse. Alexander's army is still laden with wounded and plunder from the Granicus contest.

The Persians attacked against a primarily infantry army that didn't see them coming. It was a classic ambush situation. The Macedonian archers managed to inflict some early losses as the Persians closed. The Companion cavalry counter-charged, driving off the Persian light horse which simply didn't fancy a fight with them. The remainder of the Iranian heavy cavalry clashed with the Macedonian infantry which Alexander was desperately trying to form up against them. The Hypaspists received them and drove them off, but there were a lot of stragglers picked off. By the end of the fight Alexander could see he had lost some precious infantry. But the Persian detachment was now in full flight and was not to return.

On the upside Alexander scores +2 Glory (6). The road to Sardis is now open and he can move in to take the city without further fighting. This time he chooses to install a garrison in Sardis. He picks up some more loot here, worth +8 Gold (21). It is time to quarter the army in Sardis for the winter. Alexander spends his Glory to appoint Callisthenes as the chronicler of his future campaigns, enhancing his overall future Glory gains. Callisthenes starts packing his bags for Sardis.

The treasury needs to be protected for the campaign in 335 against Halicarnassus and Lycia. Plus some gold needs to be spent on a refit next turn of the regiments which were decimated in the battles over the last two years. Another battle is expected in the coming year. A further 5 Gold is received from taxes on Sardis (26). Alexander decides to spend 3 Gold on building a temple at Sardis to celebrate his victories and give thanks to the gods (1 re-roll in future battles).