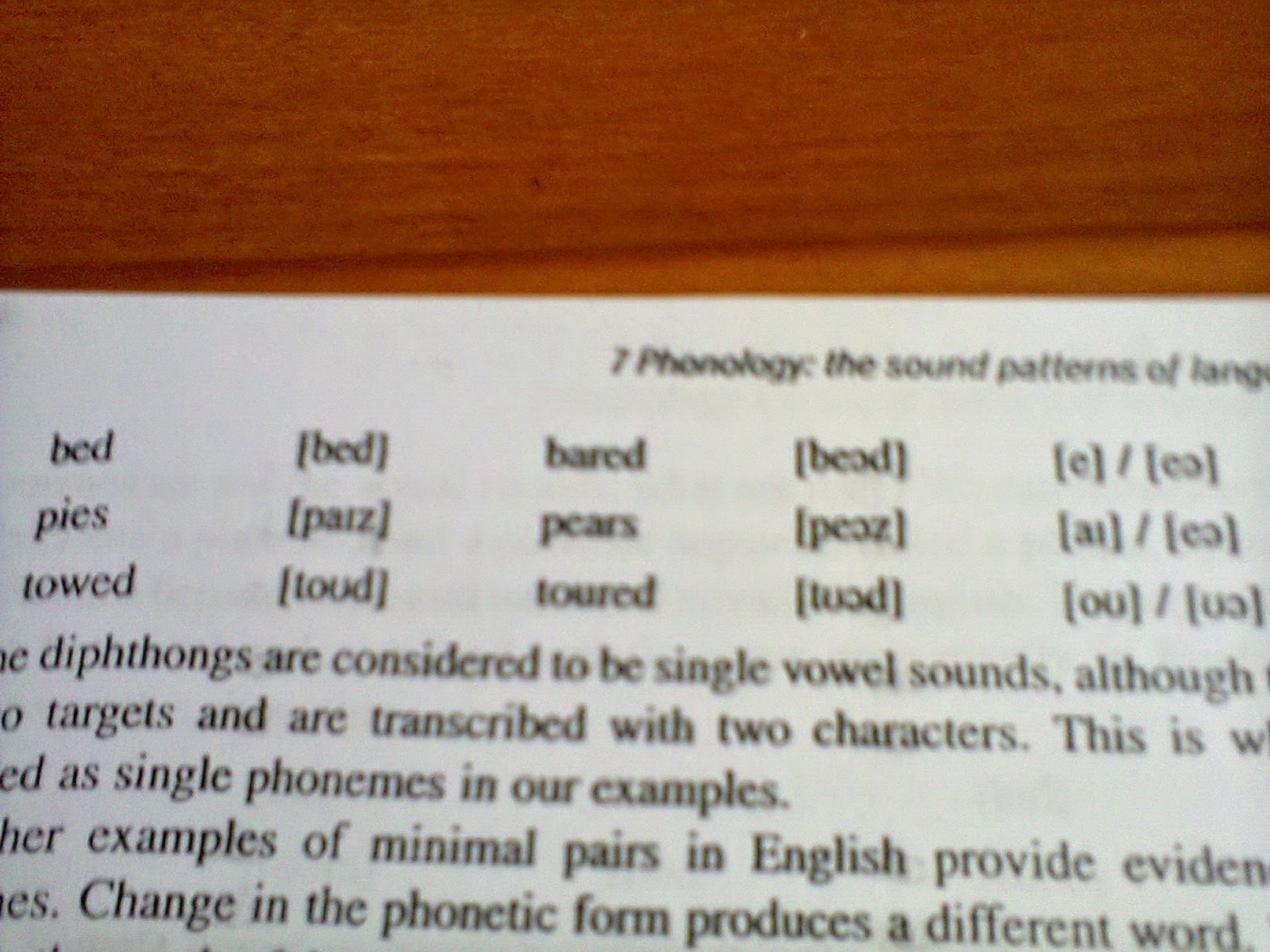 The vowels [ɪ] and [i] in the pair crick and creek and [ʊ] and [oʊ] in the pair crook and croak are phonemes. The substitution of one for the other makes a different word. The phonetical difference between the two words in each pair is minimal because they are identical in form except for one sound segment that occurs in the same place in the string. For this reason, such pairs of words are referred to as minimal pairs. These four words, together with Crake,2 crack and crock, constitute a minimal set.

All the words in the set differ by just one sound, and they all differ in meaning. The vowels that contrast these meanings are thus in the class of vowel phonemes in English.

For some speaker, crick and creek are pronounced identically, another example of regional dialect differences; but most speakers of this dialect still contrast the vowels in beat and bit, so these high front vowels are phonemes in their dialect.

Note that seed [sid] and soup [sup] are not a minimal pair because they differ in two sounds, the vowels and the final consonants. It is thus not evident as to which differences in sound make for the difference in meaning. Similarly, back [bæk] and cad [cæd] are not a minimal pair because although only one sound differs in the two words, the [b] occurs initially and the [d] occurs finally, However, [i] and [u] do contrast in the minimal pair seep [sip] and soup [sup], [d] and [p] contrast in deed [did] and deep [dip], and [b] and [d] contrast in the following minimal pairs : 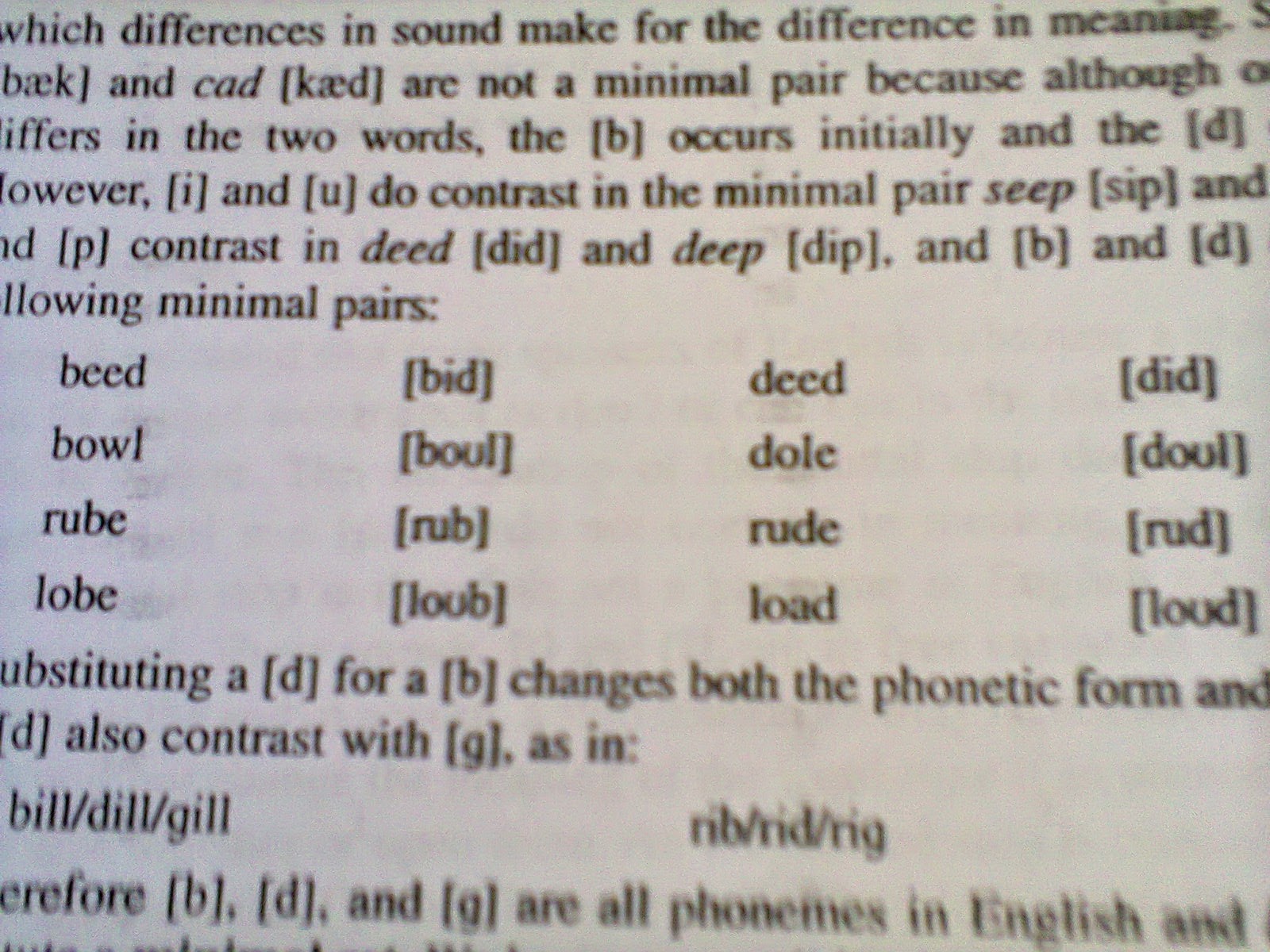 Substituting a [d] for a [b] changes both the phonetic form and its meaning. [b] and [d] also contrast with [g] as in :

Therefore [b], [d], and [g] are all phonemes in English and bill, dill, and gill constitute a minimal set. We have many minimal sets in English, which makes it relatively 'easy' to determine what the English phonemes are. All the following words are identical except for the vowels; therefore each vowel represents a phoneme. 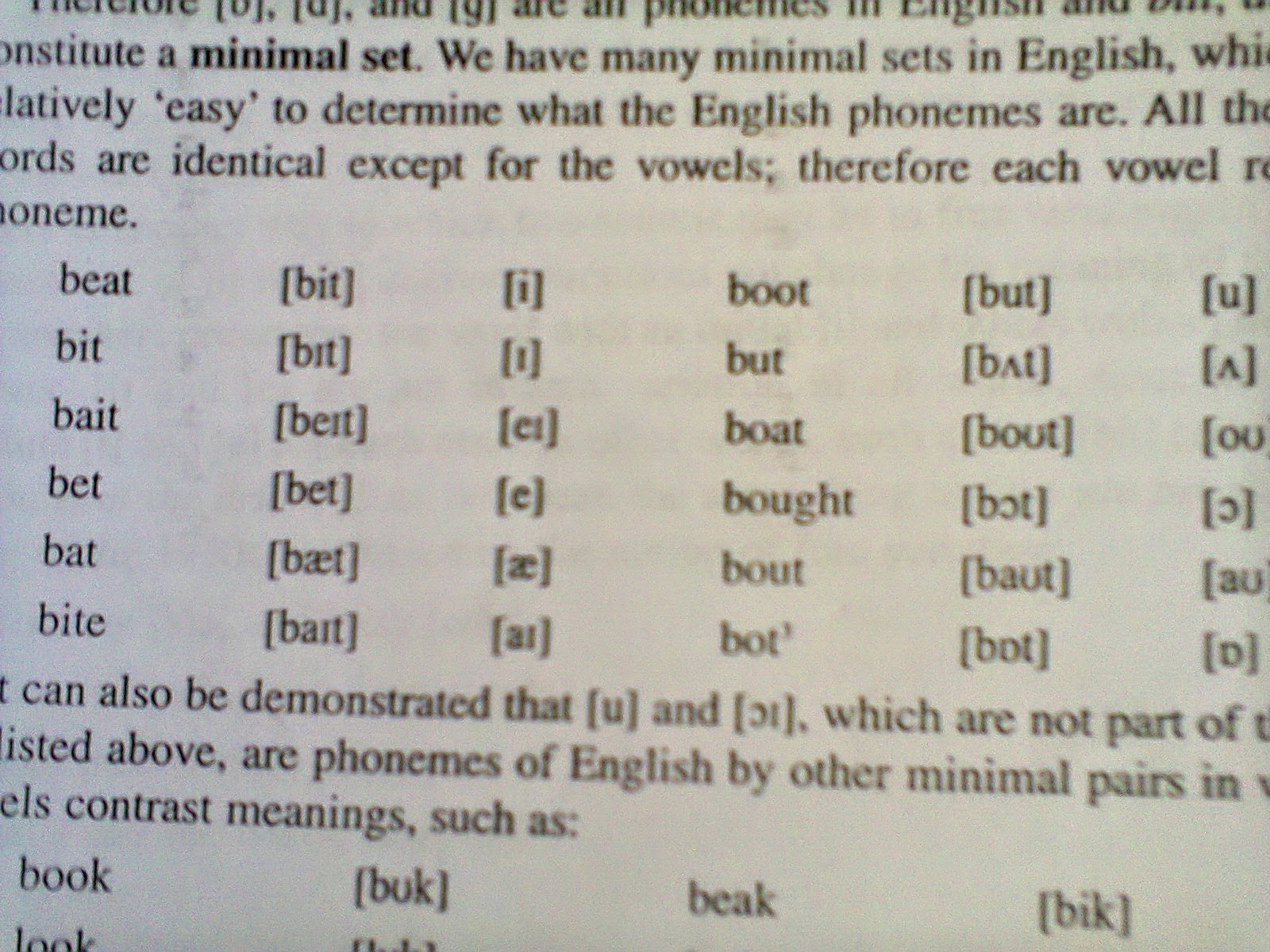 It can also be demonstrated that [u] and [ɔɪ], which are not part of the minimal set listed above, are phonemes of English by other minimal pairs in which these vowels contrast meanings, such as : 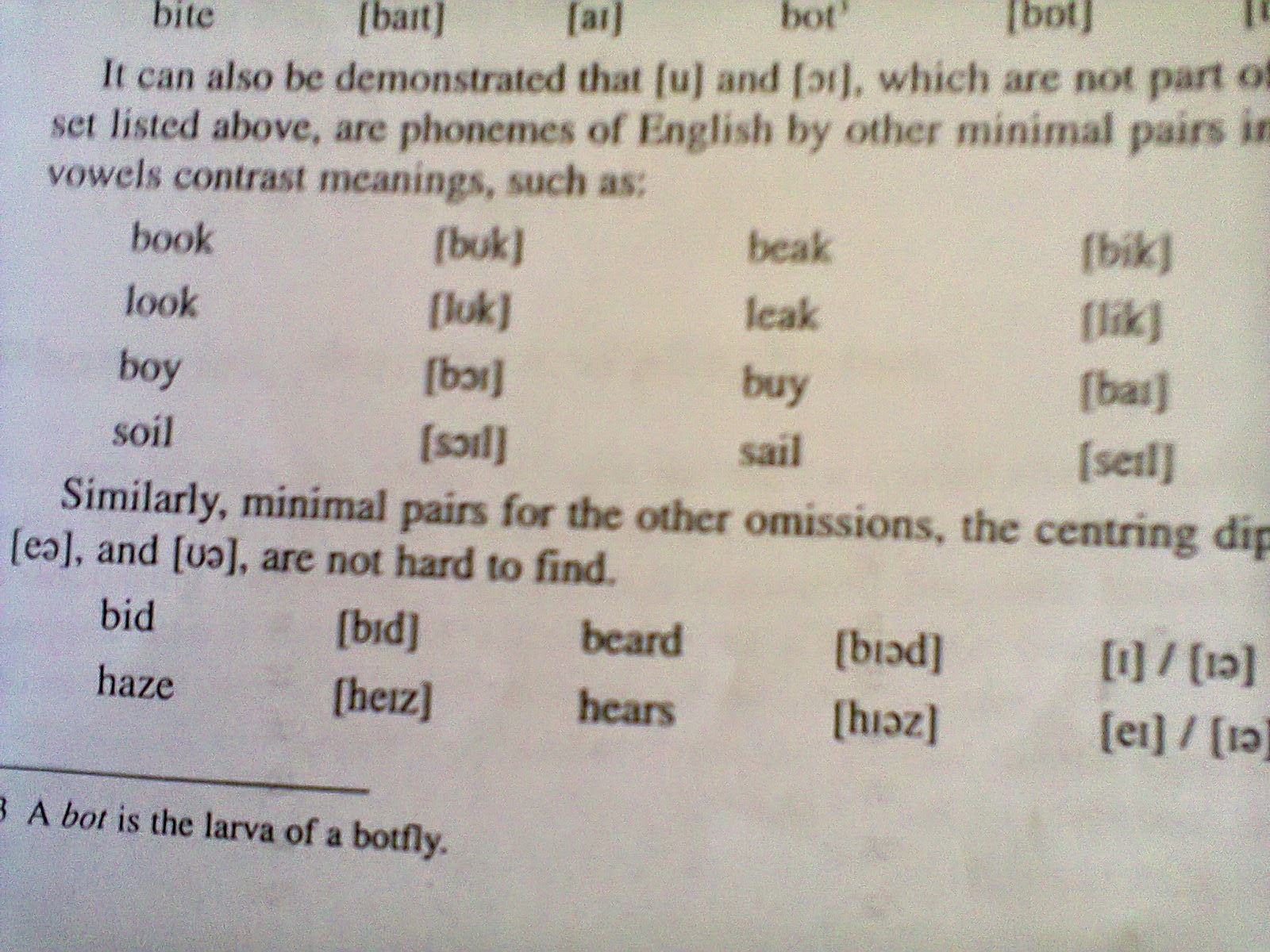 Similarly, minimal pairs for the other omissions, the centring diphthongs [ɪɔ], [eə] and [ʊə], are not hard to find.

The diphthongs are considered to be single vowel sounds, although they consist of two targets and are transcribed with two characters. This is why they are included as a single phonemes in our examples.

Further examples of minimal pairs in English provide evidence for other phonemes. Change in the phonetic form produces a different word. When such a change is the result of the substitution of just one sound segment, the two different segments must represent different phonemes. There is no other way to account for these particular meaning contrasts. 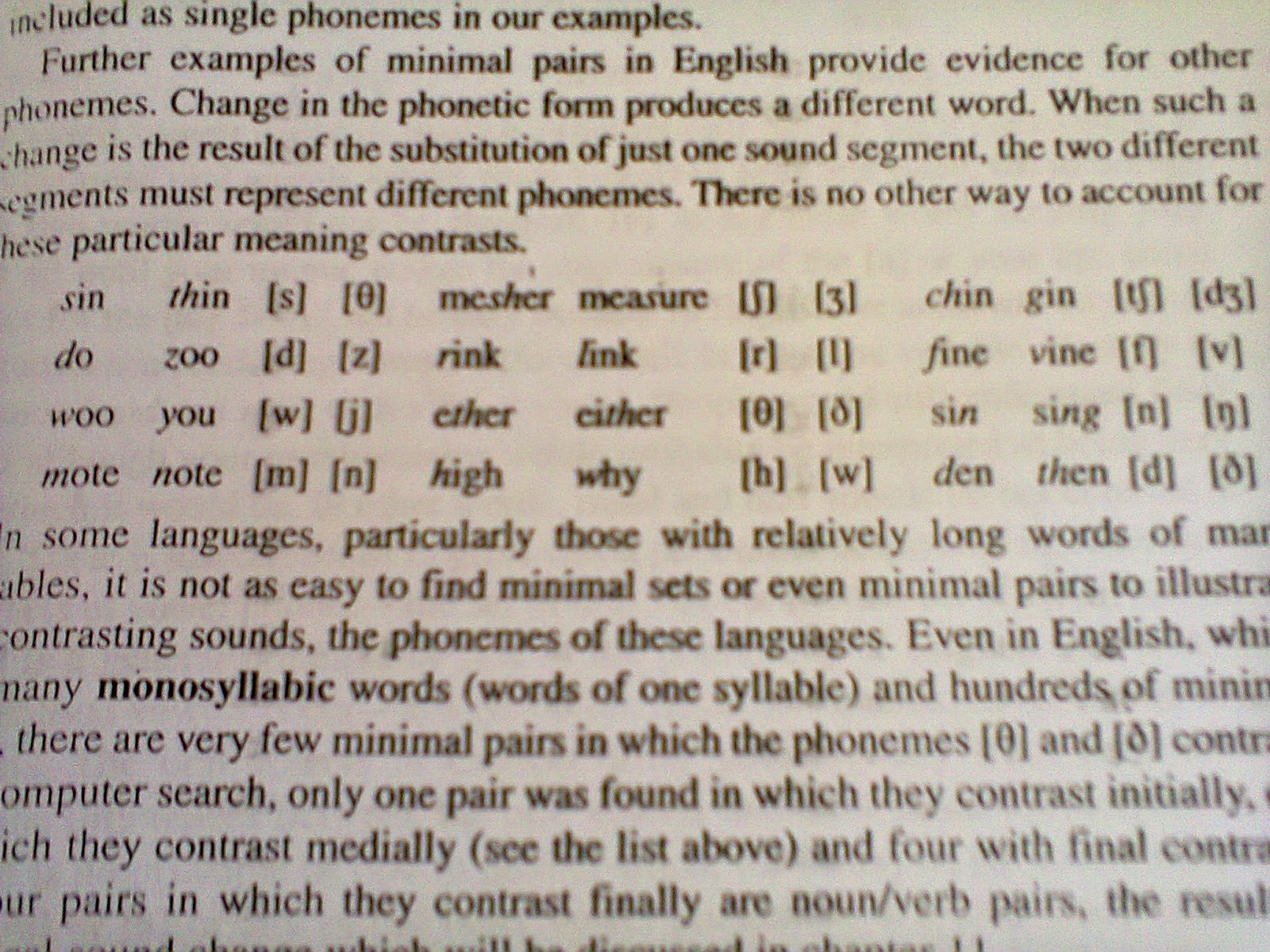 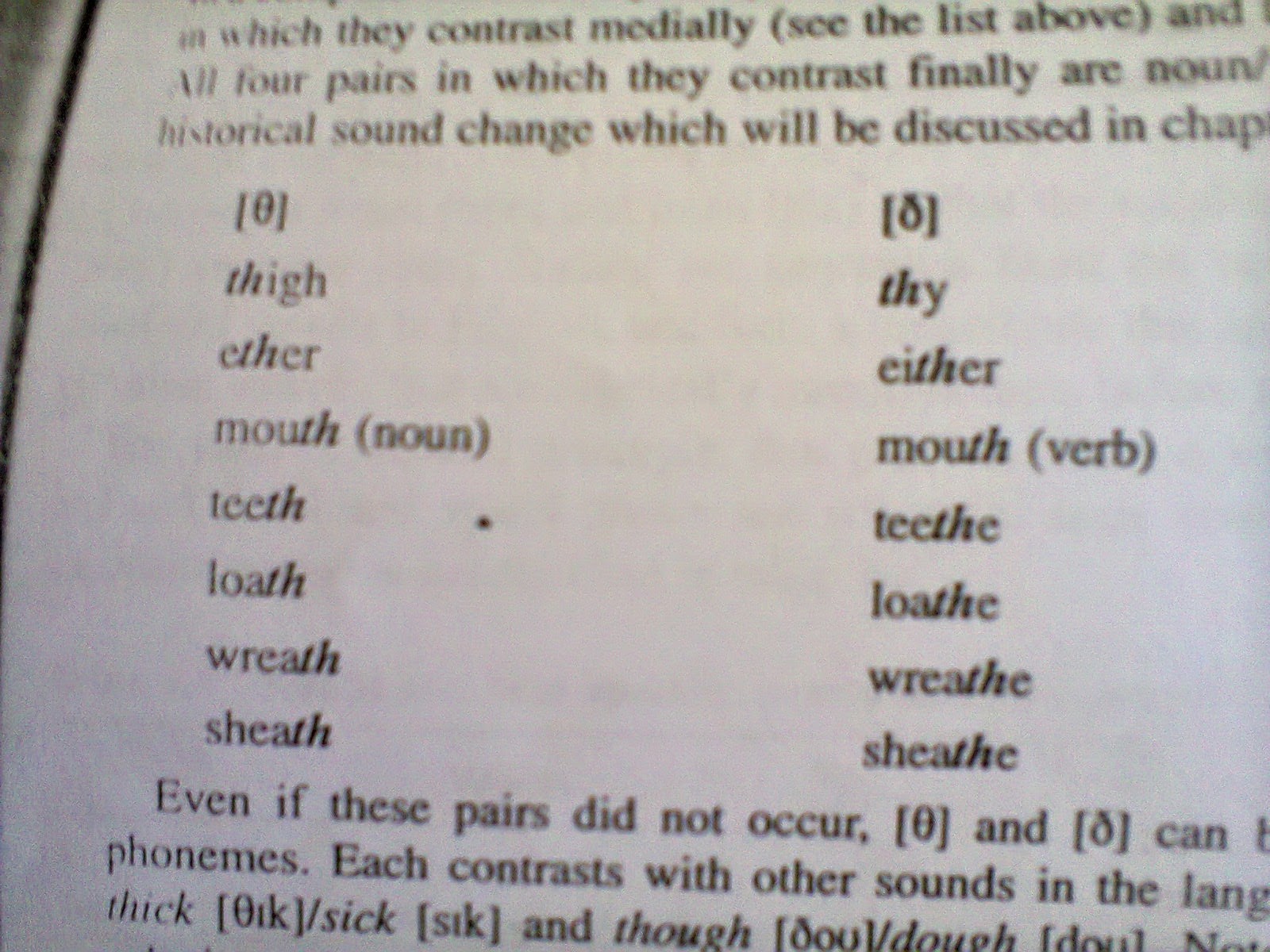 Even if these pairs did not occur, [θ] and [ð] can be analyzed as distinct phonemes. Each contrast with other sounds in the language, as, for example, thick [θɪk]/sick [θɪk] and though [ðoʊ]/dough [doʊ]. Note also that one cannot substitute the voiced and voiceless interdental fricatives in the words in which they do occur without producing nonsense forms; foe example, if we substitute the voiced [ð] for the voiceless [θ] in thick, we get [ðɪk], which has no meaning, showing that the phonemes that represent its form and its meaning are inseparable. You cannot pronounce the word any way you like, substituting other sounds for the phonemes in the word.