Fords Of The Isen, Part II (War Of The Ring)

"Elfhelm had been riding with all haste along the horse road from Edoras, leading four companies in answer to Theodred's summons; he was expecting battle, but not yet for some days. But near the junction of the horse road with the road down from the Deeping, his outriders on the right flank reported that two wolf riders had been seen abroad on the fields. Sensing that things were amiss, he did not turn aside to Helm's Deep for the night as he had intended, but rode with all speed towards the Fords..."J.R.R. Tolkien - The Unfinished Tales

From out of the east came Elfhelm's riders, at speed, and behind them came the rangers of Arnor. These valiant men of the north, fresh arrived in Rohan, took up a position on a hill opposite the ford now held by the trolls. They bore with them mighty bows, and showered arrows on the wargs. The warg leader was wrathful at this, and moved his pack out of range, threatening the middle ford first, then proceeding to the southern one. Many wargs lay dead in in the pack's wake, with Arnor arrows in them. 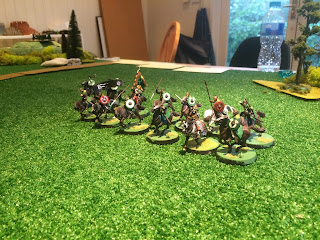 The arrival of Elfhelm
In the centre the battle raged on. Toe to toe, the Uruk-hai scouts, rallied by their fearsome lord, stood against the hand picked Rohan royal guard, while nearby Grimbold and his men fought with the lesser orcs. But Grimbold's men were losing, and all it took was for the goblins to come swarming off their hill, assailing Grimbold's militia to their rear, for the company to collapse in its entirety. Mighty was the slaughter then, and Grimbold lay amidst the Rohirrim dead. 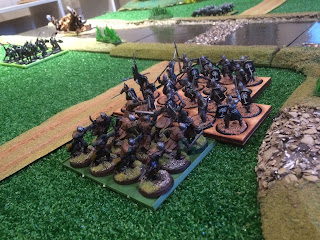 Far across the field, young Theodred, Prince of Rohan, fought with the Uruk pikes of Isengard. The best of the mounted Rohirrim paid dearly for Theodred's vainglorious efforts to reduce the enemy. In the end, Theodred fell, mortally wounded, but not before the orcs had scattered, pursued by the last of his knights. As he faded from life, he heard in the distance the horns of Elfhelm as he forded the Isen, or was it the call of the Valar? 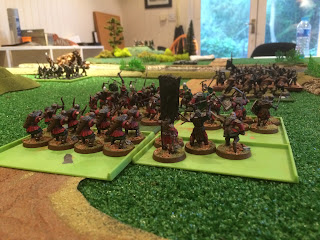 The doom of Grimbold...

Still the battle hung in the balance. The wargs now charged the Rohan guard holding the southern ford, and got in among them, although several wargs fell to yet more arrows as they charged. Heroically, the guards stood to a man by that fateful river, and not one left the field. The forces of evil now controlled two of the three fords. 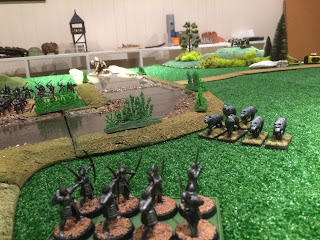 Wargs charge the Royal Guard at the south ford

In the centre now, the Rohan guard was attacked treacherously in the flank by armoured Uruks while they continued to battle the scouts in front of them. Over a third of Saruman's host lay dead, dying or had fled the field. But not enough. The remaining orcs and goblins sought to form themselves into line to face Elfhelm, who now charged from the south, angered by the death of his prince. 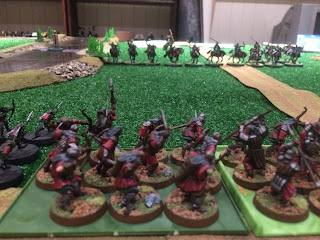 Orcs of the White Hand face off against Elfhelm's men

The Rohirrim, with Elfhelm at their head, plunged in amongst the orcs, shrugging off their black arrows, and dozens of the evil beings fell before them. Others, faint-hearted, turned and fled... 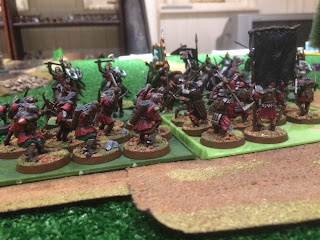 The Rohirrim ride into the orcs!

The battle hung in the balance. But sadly we had run out of time. The table was to be cleared for a new game. Both generals claimed victory. Who would have won? We will never know. Perhaps another day we will return to the blood-soaked banks of the Isen river.

Post game observations - Isengard held two fords, two of its three objectives. The third, the centre one, was still disputed, as the Rohan guard, a powerful infantry unit, was keeping the Uruk-hai away from it. However, they had two companies of armoured Uruks still to deal with, but the orc scouts were tiring, down to one company. The question was whether Saruman's general chose to switch units, thereby transferring his enhancements to the fresher companies, or indeed seek to slay the Rohan guard captain himself.

The other decisive contest was between Elfhelm and the Isengard orcs. Rohan had routed six companies out of the 13 he needed to win, so he was almost halfway there. If he destroyed the orcs and goblins in the centre, he would be on 12 and close to victory. But Elfhelm's riders were not Theodred's knights. Still too close to call, I fear. But had the Rohan royal guard collapsed, then Isengard would have taken the centre ford and would have triumphed.

Played using The War of the Ring miniatures rules by Games Workshop.