I'm running through a game of Dragon Rampant in my garden lair at the moment when I get the odd spare moment. It is actually a good way to get my head around the system. I have already described the two sides in a previous post. Now it is on to the action.

The situation is an ambush, with the good guys under Duke Earald of Fornost wandering into an ambush in the wilds of Eriador. The ambushers are orcs led by the wily sorcerer Talion. The Arnor troops have to get through the ambush and escape off the other side of the table. The orcs have to stop them.

Arnor deployed first. All units had to be in contact with their end of the table. Earald deployed with his cavalry on his flanks, his infantry units in the centre, with the rangers right of centre. He stood with the Fornost heavy foot. 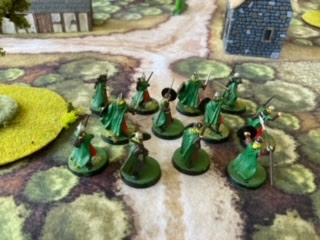 Talion had one unit of orcs entering from either side, and also divided his uruks similarly. The wargs would come on with the armoured uruks. Talion could not deploy closer than 18 inches to enemy units, a condition of the ambush situation. Note also that the forces of Arnor are prohibited from attacking in the first two turns, again due to the ambush.

Talion gets first move as the Attacker in this battle. He activates both his uruk-hai units successfully and advances them. The scouts encountered a hedge, forcing them to halt until next turn due to crossing an obstacle. Talion manages to activate and advance all units.
Duke Earald then activates all his units successfully, although forgets to move his heavy infantry off the base line because he is an idiot. He also somewhat controversially advances his light cavalry into woods on his right, which slows them down considerably. Earald is a buffoon of the first order. 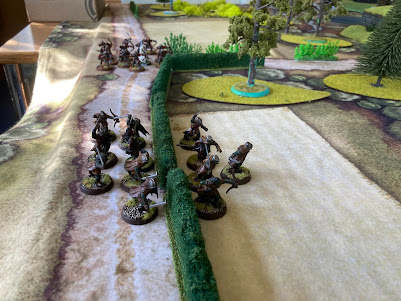 The scouts are bellicose foot which means they are subject to a wild charge IF in attack range of an enemy unit. This means basic move distance from the foe. But they are also within command range of Talion who can cancel this with his Patient ability. However, this is all academic, as Talion fluffs his activation roll this time on the first unit and initiative returns to Earald.
Earald can't charge the uruk-hai yet because of the ambush rule. The best he can do is advance his Fornost knights to line them up for a charge on the struggling scouts on the next turn. 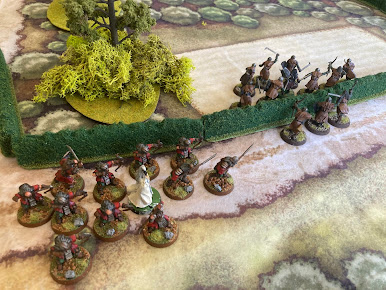 Scouts crossing hedge on right, Talion on left in white

Talion activates his scouts this time - the dice are kind. The scouts don't have missile weapons so Talion elects to charge them at the knights regardless. As heavy riders the knights may counter-charge and roll to do so (they need a 7+ and get 7). This means they meet the scouts half way. The scouts need 3s to hit and score 9 hits on the knights. The knights are rolling using their defence value, and there are only six of them against 12 orcs but get eight hits on the enemy. For every three hits the orcs kill one knight, so they manage to slay three of Fornost's finest. The knights kill an orc for every two hits, so the orc unit loses four.
Both units now need to make a courage test because they have taken casualties. The orcs have to get 4+ but are -4 for their four dead, and +1 because of their proximity to their commander Talion. So they are rolling at -3 and need a net 4+. If they get less than 4 they have to retreat. If they get less than zero they rout. The scouts come up with a dough nut and decide to flee the battle. The knights make their roll and remain in place.
Talion moves his orcs back a bit on his flank to give them some range to shoot at the knights, but also so that I can test the magic rules. He tries to bring his wargs over from the other side of the field, but they get distracted by a rabbit, ending his turn. 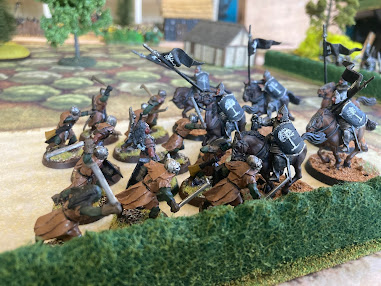 Looking at my notes, I think I did not get onto Earald's turn, so will need to play that out next time. Stay tuned for more.