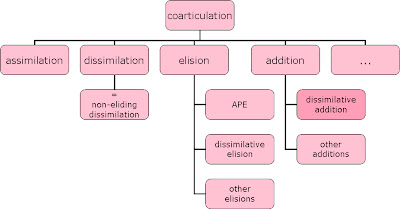 In my blog posting of the 9th of July I wrote about non-eliding dissimilation.Today I would like to draw your attention to what I call dissimilative addition.

Dissimilation describes the result(s) of avoiding two similar or identical sounds to be in relatively close proximity in the chaine chaîne parlée. Basically there are various ways to achieve this:
We can try to avoid having a second similar sound to appear. Take the plural form