Ok, so this past weekend I discovered that Louisville was home to a Clearwater Seafood Distribution Center. So what do I do? I order two fresh live lobsters to be delivered to my home. 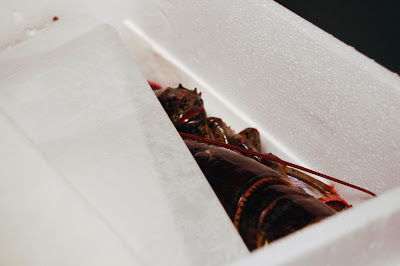 Who knew that this would be the most gratifying and traumatic experience I've had in a long time. 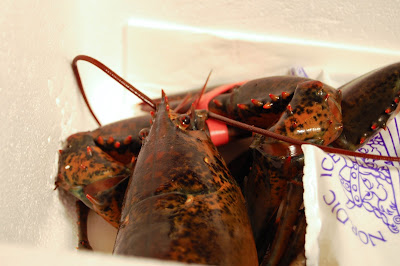 The little critter moved! I've never had my food move! Of course they're gonna move, Peggy, they're alive. What would make me think that it would be easy.

So as I opened the cooler box that they came in, I could feel my body tremble with fear. I'm bigger than these guys and they scared the heebie jeebies out of me! What a wuss I was. I frantically called Andy about 4 or 5 times while trying to kill these babies. He just laughed and said he would do it when he got home from work. But no, I needed to step up to the challenge. I couldn't just give up and let somebody else do it, especially Andy because I would never be able to live it down. 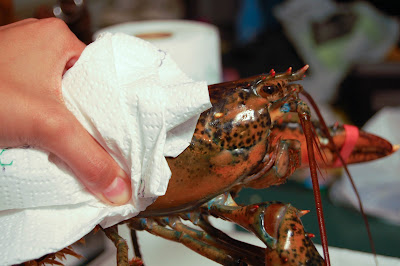 So first I needed a bigger pot. The pot that I had definitely wasn't big enough. So I left the house to go to the store to buy the needed equipment. This made things a tad bit easier. So while waiting for the water to boil in my giant pot, I tried to regain composure. By then, Andy came home and asked me if I wanted him to do it. I had to at least do one of the two lobsters. So I grabbed one of them with a paper towel and as it was flailing it's claws I closed my eyes, dropped the sucker in the pot, and quickly put the lid on. And just silence. No screaming lobsters, no fight, just silence. What a relief.

By then, I was relaxed and felt a new appreciation for chefs that do this on a daily basis. And I let Andy throw the other sucker in there because I had done enough lobster killing for the day. Anyway, had a pharmacist friend, Mike, over for dinner yesterday. He has been my food guinea pig at work for quite some time, so thought I'd treat him to a little surf n turf meal with my new cooked friends.

In large pot of boiling water, cook baby bok choy until bright green. It just really needs a quick dip in the pool. Then take out with a slotted spoon, pat dry, and set on rimmed baking sheet and cover with aluminum foil.

Allow water to come back to a boil and add lobsters, one at a time. Cook each for about 7 minutes, when lobster looks bright red all over. Let lobsters cool on baking sheet. Crack claws from body and chop tail off and remove meat from both. You can save the head and upper body for a flavorful broth, but you won't be using them for their meat. Chop meat up into small bite size pieces, but don't over do it. Put on top of bok choy on baking sheet and cover lobster meat with damp paper towel. Then cover tightly with aluminum foil. Set aside.

Preheat oven to 375 degrees. In skillet, heat up the oil. Add the garlic and cook until light golden brown. Then add chicken stock, ketchup, and chili sauce and simmer over high heat for a couple of minutes. Add the egg and keep stirring until sauce is thickened and egg is incorporated throughout. Remove from heat, salt to taste and place in serving bowl.

Bake covered lobster and bok choy for about 7 minutes, until heated through. Serve lobster on top of bok choy, top with sauce, and garnish with red pepper slices.

In large stainless steel pan, cook steak to desired consistency. I like mine medium rare, so it was about 5 minutes or so per side. Let steak rest on cutting board.

Meanwhile, add garlic and flour to pan with sucs (those delicious brown bits from steak). Cook for about 1 minute, or until fragrant. Then deglaze pan with wine and broth, making sure to scrape the sucs from the pan so they're incorporated in the liquid. Reduce liquid until desired consistency.

Cut steak into strips and top with sauce. Pair with lobster and there you have a delicious surf n turf!! 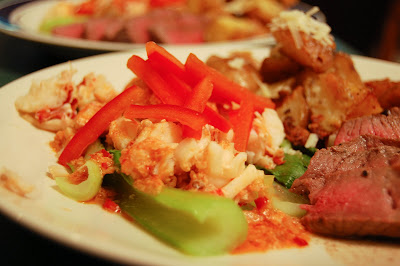 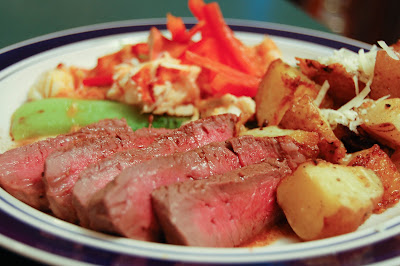