With Ben fully recovered by Friday evening, we were able to continue with our regular Pathfinder campaign. The characters are now all 5th level, and some players are dabbling in the multi-classing features of the game - Tarion is now Ranger 3/Rogue 2, while Sir Erudil has gone for Paladin 4 and we suspect Sorceror 1, although he is playing his cards close to his chest! Manoj simply can't keep his hands off the arcane magic in this game.

We were a bit slow to start the session, but the PCs eventually got their butts moving back to Lepidstadt, having cleansed the village of Herzstag of wraiths. They brought with them the bones of two of the victims.

The following morning the trial of the Beast known as Frank continued, and while initially it looked as though it might prove harder to defend him against the charges - as the Beast WAS present at Herzstag - we were able to make use of divine magic again. Veneticus cast Zone of Truth and Speak with Dead to clearly demonstrate that it was some kind of boss wraith that was the culprit. We are still concerned that at least one of the judges is clearly evil (according to Sir Erudil) and that either agents of darkness on the bench, or the blood lust of the mob, could make things more...complicated in the medium term.

Our third trip out of Lepidstadt was to the ruins of the asylum that the Beast was alleged to have destroyed. Before leaving, we spoke with the only survivor of the fire, one of the staff, who had been blinded. He announced he would be standing as a witness for the prosecution (throughout the trial, Frank has sadly lacked witnesses in his defence, other than members of the adventuring party). From his testimony, it does sound like the Beast - or possibly an alchemist posing as him - was there.

Exploring the charred ruins, we stumbled across evidence that the owner of the asylum was being supplied with chemicals by Grime & Vorkstag. Eventually we found a shaft leading to some kind of basement level. Veneticus cast Hide from Undead on the entire party and then descended by rope. Sir Erudil cast Featherfall to drift down alongside him. 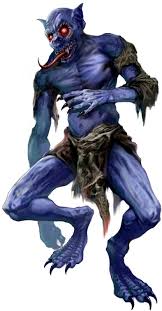 Reaching the bottom, Veneticus was attacked by two ghouls. He used his positive channelling on them before he was knocked down and paralysed. Luckily Sir Erudil arrived shortly afterwards, and began laying around with his mighty warhammer. Nicodemus came into the dank cellar third, cast his Turn Undead to drive off two ghouls, and then was promptly knocked down and paralysed himself, leaving Sir Erudil facing two more ghouls.

Eventually, the paladin slew three of the beasts, with Tarion arriving last, and making short work of the fourth ghoul. Methinks in future Sir Erudil and Tarion should be first into those areas where we suspect the presence of undead. Tarion has two weapon fighting and favoured enemy - undead, which helped him enourmously in this fight.

Further exploration of the cellar and the ruins uncovered more evidence of the delivery of supplies by Grime & Vorkstag, plus we noticed that the ghouls were wearing belts with severed heads on them, presumably belonging to the dead doctor and his patients. More disturbingly, we also exhumed some creatures in the asylum's cemetery, obviously hybrid creations similar to Frank, but really of an inferior quality, mindless abominations that had been buried alive.

It seems as if the asylum's owner may have something to do with the creation of Frank himself, leaving open the possibility that he could indeed have attacked the asylum and destroyed it. This could make it a tad more difficult to defend him against the arson charges he faces on the morrow!

Poor old Sebastian again turned in before the fighting started. It is unfortunately the case that in the last three sessions he has participated in, he's been around for the roleplaying part of the session, with the exploration and combat falling into the second half!