My second match of the Brighton Blood Bowl season took place against another Chaos team, this time conference rivals Citizen Change. Unlike the Lambs, Citizen had no Minotaur. This didn't help me much, although my Minotaur Big Jim did manage to put one of the Citizen Chaos Warriors out of the game entirely, and earned himself some Star Player Points (SPPs) as a result. 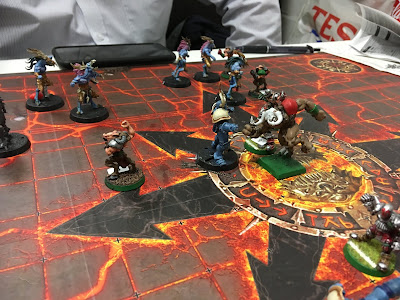 Citizen Change in blue - with a decidedly Tzeentchian aura about them.

I'm still learning the ropes, having not played Blood Bowl since at least 2006. Chaos is my chosen faction but I get the feeling that they start with a bit of a disadvantage early on and need to work hard to acquire skills. Having said that, like the Necrons I enjoy playing in Warhammer 40,000, it is tweaking the team and getting it operationally just...right...that can pay dividends.

This was not one of those times. There was one opportunity for the Lambs to score late in the first half, but we ran out of time (it was my eighth and final turn, and a Beastman ball carrier came up just short). 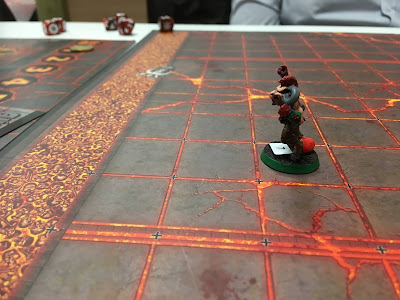 Sadly this is as close as the Lambs got to scoring all night!

I'm being handicapped a little by a lack of team re-rolls; my opponents regularly have 2-3 of them while I'm just picking them up as part of my inducement package. For this game I managed to acquire one, but it was not enough. I don't think I made the most of my inducements but my opponent was also relatively new to the game and we both spent quite some time consulting the rules.

Having said that, things just went wrong repeatedly for the Lambs in this one, largely in our own half, which then led to the opposition picking the ball up and running it in for a score. You don't want to mess up too deep in your own half in Blood Bowl. 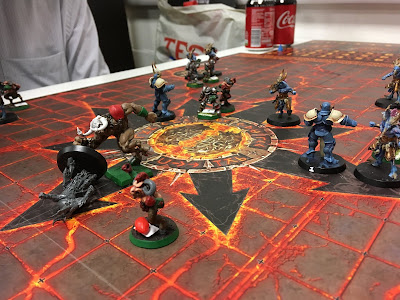 I was also down two players, with Horns Herman and Gunther Goat Feet on injured reserve and I lost another player - Helmut Hooves - to a fractured leg  - which will permanently reduce his Agility. Gerhard the Grunter managed to complete quite an ambitious pass, but the Lambs were outnumbered, and gambling all the way. It could have been closer if their luck had not been so poor.

You might think getting routed so badly in the same week as a severe drubbing in Frostgrave would have left me miserable, but I have to say I'm quite enjoying the Blood Bowl league. It is the first proper league I've played in, and while I'm quite rusty, the players have been very sportsmanlike and unfailingly helpful with explaining the rules and tolerating my blunders. 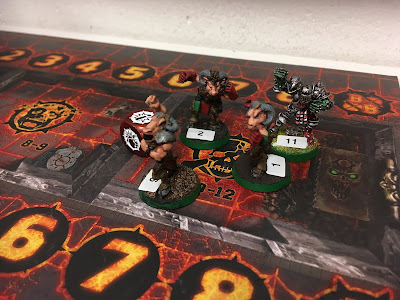 Losses mounted in the second half - even Ivan Aike (11) was out.

Issues that need resolving? A lack of re-rolls is my key mistake here. This really killed the Lambs in this game. It will cost me 120,000 gold to rectify this and currently there is only 90,000 in the treasury. There is a lack of star players too and I'm wondering whether I should just ignore the passing game altogether and focus on running the ball, somehow making use of Big Jim as the anchor of my offense.

The Chaos Warriors are all doing sterling service and are able to wreak havoc all over the pitch - their armour and strength are excellent, and once some of them get a little more experience they will become really quite dangerous. Lack of experience is really costing the Lambs at the moment, however. 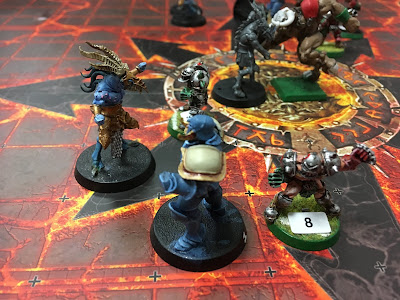 Size comparison of a 1991 Chaos Warrior and his 2017 counterpart.