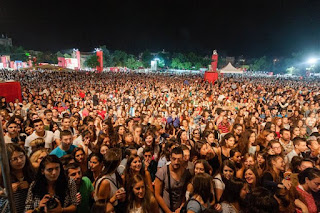 KNE-Odigitis Festival (Archive photo).In Defense of Communism with info from 902.gr.
For more than four decades, the KNE-Odigitis Festival, organised by the Communist Youth of Greece (youth wing of the KKE), consists a major annual cultural and political event.
This year, the KNE-Odigitis festival will honor the Great Socialist October Revolution, using as a major slogan the lyrics of the Soviet poet Vladimir Mayakovsky: "100 years since the October that shocked the world "the future will not come on its own… If we do not also take measures".
The 43rd KNE-Odigitis Festival will honor the centennial of the October Revolution, with the eye turned to the future, promoting the timeliness and necessity of the struggle against the barbaric capitalist system, of the struggle for the construction of socialism, for a society without exploitation of man by man.
Events of the 43rd KNE Festival will take place throughout Greece this summer, leading to the large festivals in Thessaloniki and Athens on September. More specifically, in Thessaloniki the 43rd KNE-Odigitis Festival will take place on 14-16 September and in Athens on 21-23 September 2017.